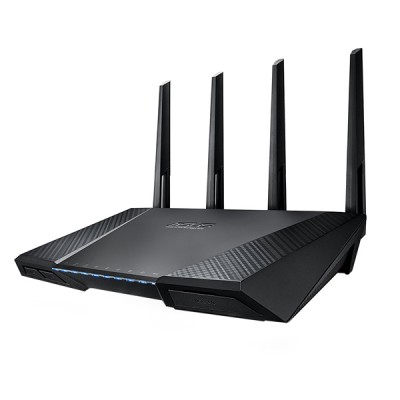 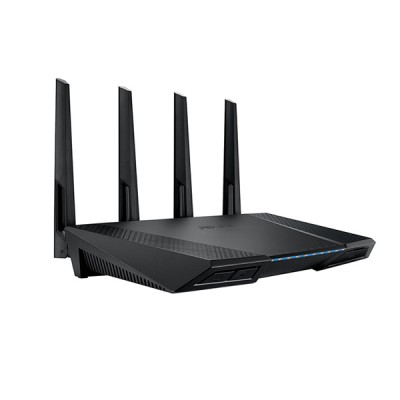 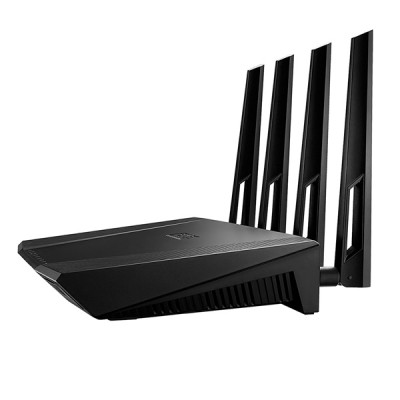 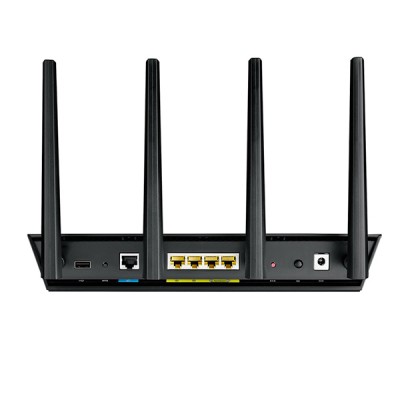 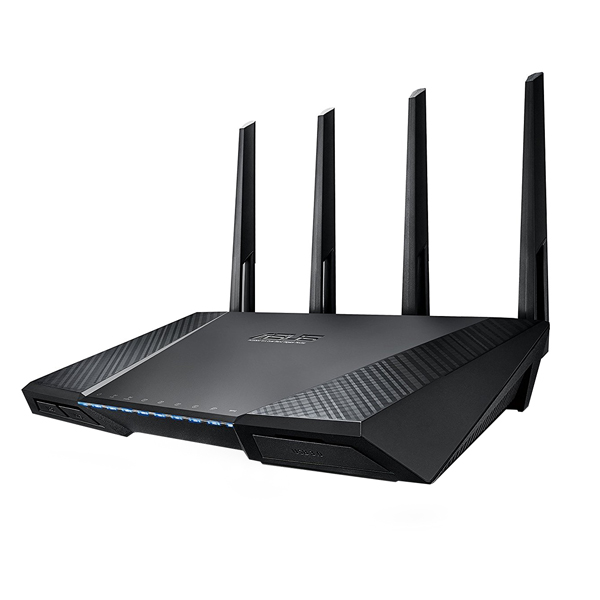 Enter a new era of wireless performance with faster-than-incredible speeds, wider coverage and more control than you ever thought possible. RT-AC87Udelivers the super-fast speeds of up to 1734 Mbps at 5 GHz — even faster than tri-band 3x3 routers — plus class-leading concurrent 600 Mbps speeds at 2.4 GHz for an amazing total bandwidth of 2334 Mbps! This means RT-AC87U gives you lag-free online gaming, silky-smooth 4K/UHD video streaming, and effortlessly copes with even the most bandwidth-demanding tasks.
With a separate high-gain antenna for each of the four spatial data streams, this power-packed router gives you true 4x4 multi-user MIMO (MU-MIMO) wireless performance that smokes the competition — and it delivers top performance for all your wireless devices, even those using older Wi-Fi standards. As with all ASUS networking products, you get the very best support with wide device compatibility, plus free firmware updates for years to come — so your RT-AC87U will always be at the forefront.

RT-AC87U is designed for pure performance — as well as its main 1 GHz dual-core processor, RT-AC87U also has a separate dual-core processor that's dedicated solely to 5G Hz 4x4 Wi-Fi related tasks. This means that compared to routers with a single 1.2 GHz dual-core processor, RT-AC87U has Wi-Fi-to-USB transfer speeds that are up to twice as fast2, and can show up to a 50% improvement in total throughput on a heavily-loaded network with multiple clients!3
RT-AC87U is not only fast, but looks stunning too. Inspired by the gamer-centric ASUS Republic of Gamers G Series notebooks, RT-AC87U is designed with Stealth Fighter-like curves that exude power and sophistication.

While RT-AC87U succeeds RT-AC68U's decent USB 3.0 network storage performance, its USB transfer speed over Wi-Fi has been largely improved. When transferring files to and from SuperSpeed USB 3.0 devices over Wi-Fi, our tests2show that RT-AC87U can be up to twice as fast as a router with a single 1.2 GHz dual-core processor.

In tests3 simulating a heavily-loaded network with three wired and two wireless clients, PCs, RT-AC87U's hardware NAT and dedicated Wi-Fi processor helped it deliver a total throughput (2.4 GHz, 5 GHz and NAT) up to 50% faster than a typical router with a single 1.2 GHz dual-core processor.

Enjoy a new level of wireless performance, with 2334 Mbps of combined 802.11ac and 802.11n bandwidth. With class-leading speeds of up to 600 Mbps on the 2.4 GHz band — thanks to Broadcom® TurboQAM™ technology — and up to 1734 Mbps concurrently on the 5 GHz band, which is even faster than the latest tri-band 3x3 routers, RT-AC87Uleaves the competition standing.

At the forefront of technology

RT-AC87U doesn't lead others, it dominates, offering the best current-generation performance for all your notebooks, smartphones and other wireless devices.

The revolutionary and future-proof MU-MIMO technology means that RT-AC87U will be able to connect to multiple MU-MIMO-compatible clients at each device's maximum speed simultaneously, unlike standard single-user MIMO where individual devices have to wait for sequential transmissions. This means that as users add more MU-MIMO-enabled devices, the router's capacity actually increases, giving all users the best possible internet experience5.

LIFE IN THE FAST LAN

For the fastest wired networking performance, RT-AC87Ucomes with a dedicated Gigabit WAN port, four 1000 Mbps Gigabit Ethernet LAN ports (one of which can be used as a second WAN port), and hardware-accelerated NAT. Unlike the traditional software-based NAT used in most other routers, RT-AC87U's hardware NAT removes the bottleneck between the wired LAN and the internet, allowing you to get the most out of modern super-fast broadband connections.

Removes the bottleneck between the internet and the home network, giving WAN-to-LAN performance that's between 2-5 times faster than a traditional software-based NAT.

Configure one of the LAN ports as a WAN to use two internet connections, either to share internet traffic between them or so that one can be used as a backup connection should one connection fail.

RT-AC87U, like all ASUS networking products, is subjected to exhaustive compatibility testing during its development. RT-AC87U works flawlessly with a vast range of adapters, media players and other wireless devices to ensure the best performance — it even supports the latest-generation Xbox® One and PlayStation® 4 game consoles.

With its massive data pipeline of up to 300,000 data sessions, RT-AC87U has around 20 times the networking capacity of conventional routers for exceptionally smooth performance.

Lets you connect devices instantly with a press of the WPS button.

Configure a VPN server or turn your network-connected devices into VPN-enabled clients — with PPTP and OpenVPN protocol support — with no need for paid VPN services or a dedicated VPN server. 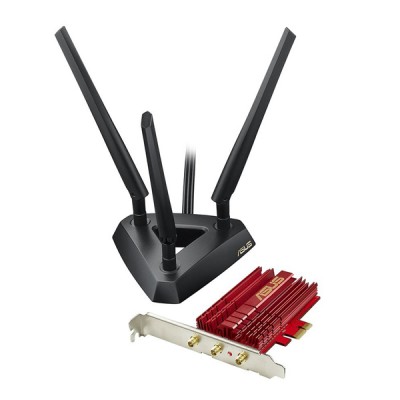 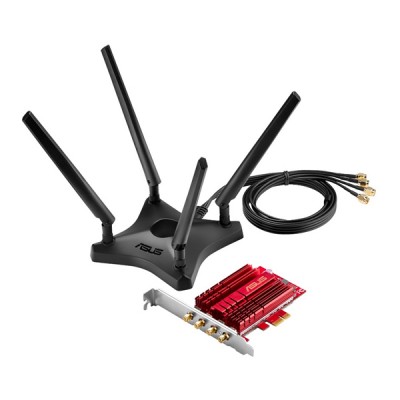 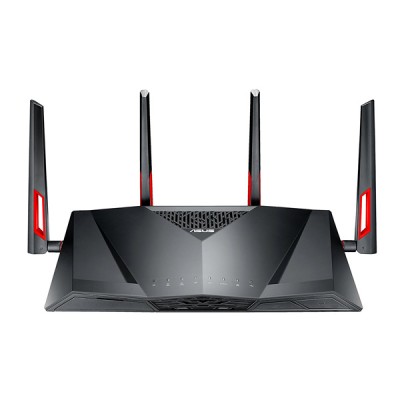 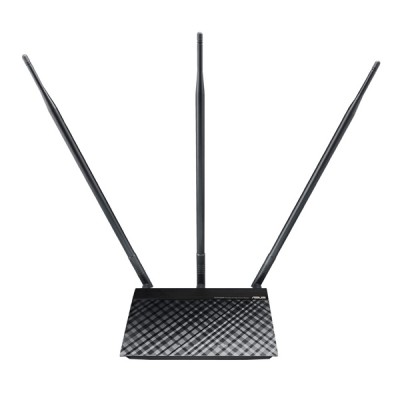 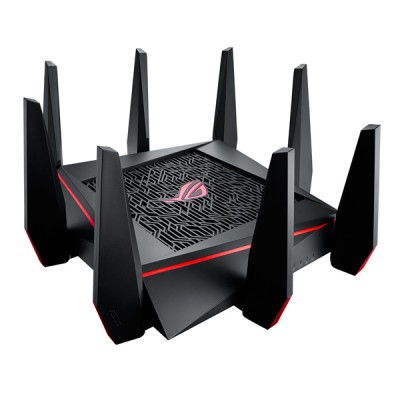