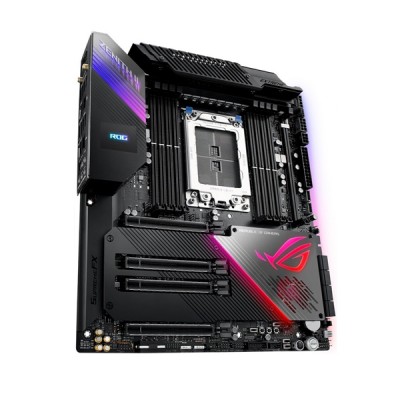 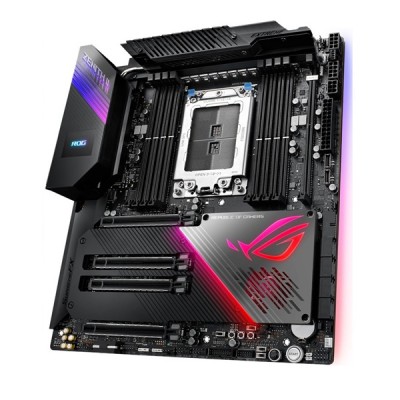 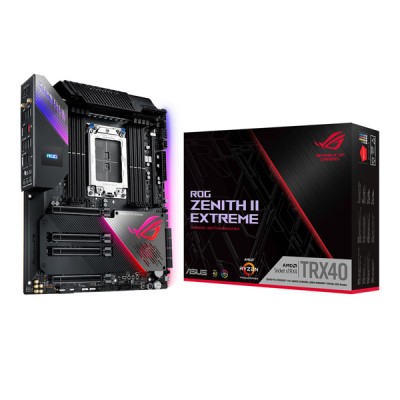 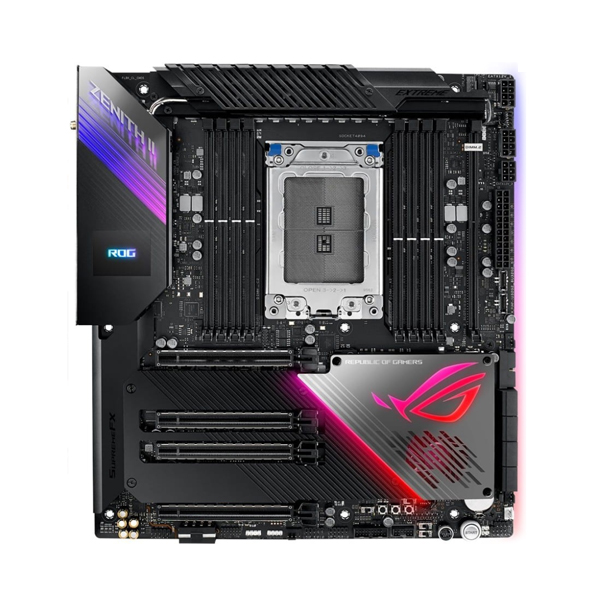 Expertly engineered for those who demand full control, ROG Zenith II Extreme is future-proofed, ready for anything in the pipeline. It's primed to unleash the full force of the latest 3rd Gen Ryzen Threadripper processors, while keeping thermals in check with a comprehensive cooling solution. Maximized lane bandwidth lets you connect up to 33 devices simultaneously, while every single PCIe x16 and M.2 slot is wired with PCIe® 4.0 – so you're free to equip next-gen graphics cards or NVMe drives without fear of bottlenecks. Massive power, massive bandwidth.

High-end desktop processors have greater power requirements due to the abundance of cores and memory channels. The latest Threadripper evolutions are particularly demanding, so intelligent VRM design and quality components are vital – especially for overclocked CPUs that live closer to the edge of stability. Accompanied with our critically-acclaimed UEFI and AI Suite tuning utility, ROG Zenith II Extreme offers an accessible range of manual tweaking tools, plus a highly-configurable auto-tuner that maximizes system control and performance with no expert knowledge required.

Our critically acclaimed UEFI and AI Suite tuning utility offer an accessible range of manual tweaking options for experts who want maximum control over their hardware. They're accompanied by 5-Way Optimization, a highly configurable auto-tuner that finds the optimal overclock for your build by methodically increasing the frequency and testing stability like a seasoned veteran would.

Having the bandwidth to fuel multiple PCIe SSDs and graphics cards is part of the allure of high-end desktop platforms. ROG Zenith II Extreme fully exploits Threadripper's 64-lane capability, empowering you to connect up to 20 PCIe devices simultaneously. Every single PCIe x16 and M.2 is wired with PCIe 4.0, and the board also accelerates both wired and wireless networking – with both Aquantia 10 Gbps Ethernet and the latest Wi-Fi 6 (802.11ax) onboard.

ROG Zenith II Extreme supports up to five M.2 drives for maxed-out storage. Two ride the ROG DIMM.2 module, next to the memory slots, and support drives up to 110m. There are another two slots under the aluminum heatsink cover, with a fifth one at the rear of the board. Every one of these slots is wired to support full PCIe 4.0 bandwidth, so they're compatible with the very latest NVMe SSDs – laying the foundation for the ultrafast transfer speeds needed to support machine-learning algorithms and drive higher-resolution game textures.

The TRX40 platform is aimed at the most discerning content creators, so Zenith II Extreme implements the latest USB standards. Ready-to-use ports are located on the rear I/O panel, and there are front-panel connectors on the motherboard to let you put USB right where you need it.

The ROG Zenith II Extreme is compatible with the latest USB 3.2 Gen 2x2. This newest USB standard doubles the transfer bandwidth by opening another USB 3.2 Gen 2 lane to achieve its maximum throughput of up to 20 Gbps.

The beefed-up bandwidth doesn't stop with the TRX40 platform. We also equipped Zenith II Extreme with multiple networking technologies, so you can push throughput to the limits.

Designed to meet the demanding requirements of power users and content creators, 10 Gbps onboard Ethernet provides a new level of home networking. With up to 10X the bandwidth of standard gigabit Ethernet, you'll enjoy streaming uncompressed 4K UHD videos, and backups and file transfers that are faster than ever before.

ROG Zenith II Extreme includes our popular Fan Extension Card II, which adds six headers that are controllable via FanXpert 4. The card features three temperature-sensor headers to complement the one available onboard, and also comes with three thermistors that can be affixed to different components. In addition to supplying extra headers for cooling, it provides three RGB headers to provide illuminated effects for your RGB fan.

Sound is an integral part of gaming immersion. ROG Zenith II Extreme's onboard audio joins the latest SupremeFX S1220 codec with a high-end ESS Sabre DAC. Power users in particular pipe content through multiple devices, so our Sonic Studio III software has an intuitive management interface that lets you route sound from applications to specific outputs. The board even supports DTS® Sound Unbound technology, to create three-dimensional audio soundscapes that draw you further into virtual worlds.

ROG is renowned for superior onboard audio, and ROG Zenith II Extreme is no exception. The front-panel headphone output features a SABRE9018Q2C integrated DAC/amp capable of reaching -108dB THD+N to provide playback that conveys all the subtlety and nuances of even the highest-quality audio track. The improved resolution derived from the ESS Hyperstream™ DAC architecture expands the soundstage to give a better sense of positioning. Beyond resolution, the 120dB DNR provides an extremely low noise-floor, further accentuating dynamics and punch. And, when you want to shift priority to musicality, our Sonic Studio software provides an array of EQ options, allowing the sound signature to be tweaked to suit your cans.

Gear up with ROG components, from graphics and monitors to mice and keyboards. And up your game with complementary aesthetics, control and compatibility. The ROG ecosystem is more extensive than any competing brand, so enjoy greater choice as your system expands.

GameFirst V is an ROG-exclusive tool that lets you use a ROG router to build a ROG-networking ecosystem. Select the best Wi-Fi channel for maximum stability and minimum interference, optimize network traffic and your connection for lag-free online gaming, team your gateways and keep tabs on bandwidth-hogging apps — all from an intuitive interface that enables easy, on-the-fly adjustments.

The ROG Zenith II Extreme is equipped with LiveDash, a built-in color OLED panel that displays useful information and customizable graphics. During the power-on, self-test (POST) phase, OLED shows key progress stats in simple language, using traditional POST codes. Then, during normal operation, the panel shows a choice of CPU frequency, device temperatures, fan speeds or information from the Water-Cooling Zone. You're also able to customize the default OLED GIF, so it'll display your own image or animation.

Armoury Crate is a software utility designed to provide centralized control of supported ROG gaming products. From a single intuitive interface, Armoury Crate lets you easily customize RGB lighting and effects for every compatible device in your arsenal and synchronize them with Aura Sync for uniﬁed system lighting effects. The software also provides control of settings for a growing number of ROG products, making it easier to tune the look and feel of your system. Armoury Crate even offers dedicated product registration and ROG news feeds to help you stay in touch with the ROG gaming community.

THE POWER OF AMD

* Refer to www.asus.com for the Memory QVL (Qualified Vendors Lists). 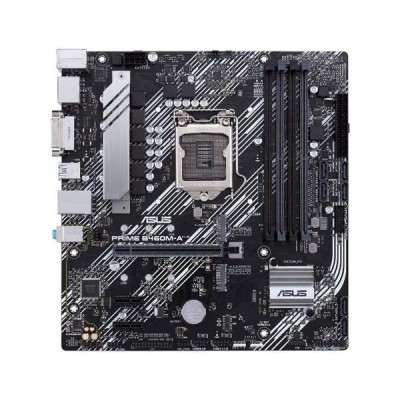 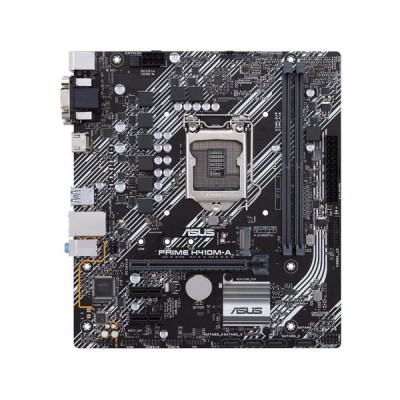 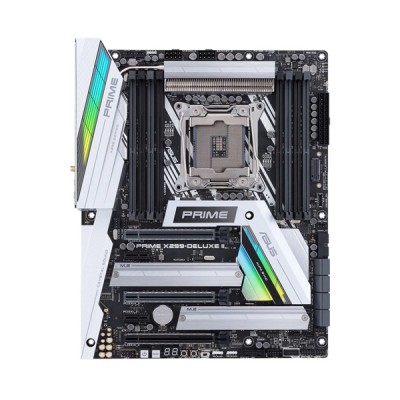 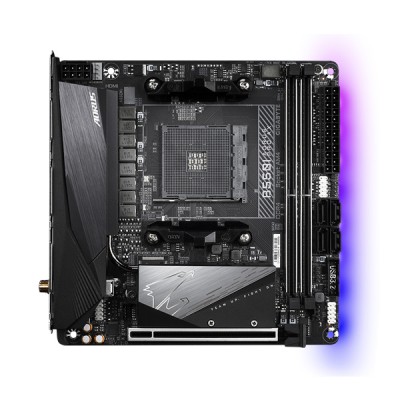 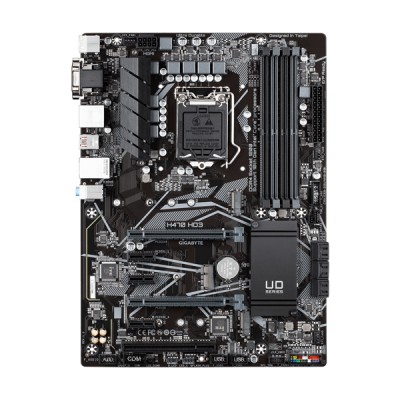